“Beer Pong” and the Holy Spirit – by Michel Williams 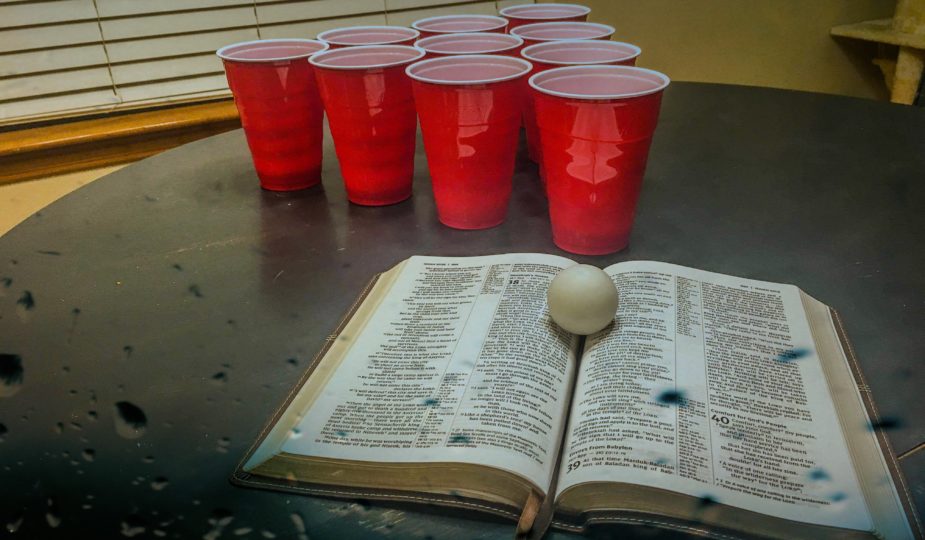 When my now 17 year-old asked to play “beer pong” with pop/water at her birthday party, I was like, “Ugh…I don’t know.”  It made me uncomfortable but I couldn’t figure out why. For those of you who don’t know, beer pong is a drinking game played with cups filled with beer and a ping pong ball. The goal is to get a ping pong ball into the other team’s cup causing them to drink the contents…yikes.   Here are some of the thoughts that went through my head when she asked:

This is how I usually operate when confronted with an issue that I am unsure about.  Often my first thought is, “I am told the bible has answers for everything I need in life but I don’t know where to look.”  This overwhelms me because I don’t know it well enough to find the answer. The reality is, sometimes when I need God’s wisdom it can be hard to find.

I thought about it and ended up allowing the kids to play even though I remained unsettled. In and of itself, the way the kids played, it was innocent.   The morning after the party though, it sat wrong with me. I had this empty hollow feeling in the pit of my stomach, almost like I had been the one out playing beer pong the night before.  I prayed about it. While I couldn’t point to a specific verse that says, “thou shall not play water pong,” I did have an unsettling nudge from the Holy Spirit warning me not to allow them to do it.  When we believe in Jesus, the Holy Spirit comes to live in us to teach and help us (John 14).

But when the Father sends the Advocate as my representative-that is, the Holy Spirit-he will teach you everything and will remind you of everything I have told you. ~John 14: 26 (NLT)

There was something about it that didn’t feel quite right but I ignored it because I wanted a concrete yes or no.  It wasn’t sinful but it wasn’t wise. The Holy Spirit pointed out to me that the issue is heart and action trajectory not about the activity itself.  Letting the kids play “beer pong” with water is still letting them play a drinking game. In fact, it was funny to them for that very reason. No, playing the game doesn’t necessarily mean they will play actual beer pong but every action opens up a potential path.  Playing the game opens the door to possibility because they played it before. It points the heart towards an outcome where they could become comfortable with it like getting into a super-hot bathtub. At first you shrink back when you dip your foot in but as you get used to it its less uncomfortable.  You acclimate.

Angie and I have been talking a lot about sanctification and becoming a new creation over the last couple weeks.  We are given the Holy Spirit almost like an internal GPS system guiding us on the path towards the person God wants us to become.  When we aren’t sure or heading towards the ditch, He is there to gently guide us back if we listen to him. He is also there to help us out of the ditch when we crash into it.  Maybe some of you think playing “beer pong” with water isn’t a big deal and maybe it isn’t for you. That’s between you and the Holy Spirit. For me and for this group of kids, I was told no but did it anyway.  I asked God for forgiveness, talked to my daughter about it, and then got up out of the ditch and back onto the path. This is an example of the process of sanctification. Sometimes we get it right and sometimes we don’t but the Holy Spirit is there to dust us off and get us back on track.